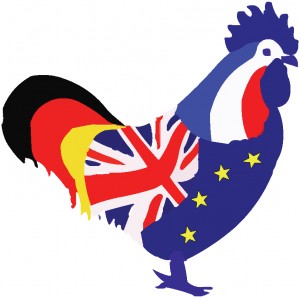 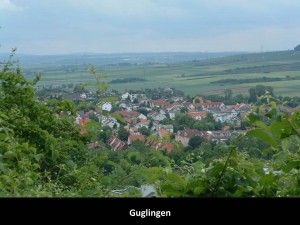 ‘Town Twinning’ marks something of an exciting departure for the Museum’s programme of temporary exhibitions. A large backdrop of graphics and text incorporates background scenes of the three twin towns which merge to show the similar topography of the areas. QR codes are incorporated into the design so that visitors can use their mobile phones or tablets to learn more about the twinning from the German and French perspectives as well as Dorking’s own. They are linked to relevant websites, as well as to Caroline Salmon’s YouTube video.

Dorking is twinned with Gouvieux in France and Güglingen in Germany with a mission to promote partnerships and relationships between the residents and businesses of the three towns. 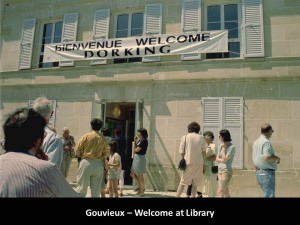 The idea of a possible ‘twin town’ in France was first raised in the early 1990s. Gouvieux was selected as being a similar distance from Paris as Dorking is from London, having similar characteristics, and, importantly, a similar network of clubs, societies and skills. An official inaugural meeting was held in the summer of 1997.

Since then, strong links have been formed in sports, music, schools and work experience. These have been exciting and informative days and everyone involved has enjoyed the experience. 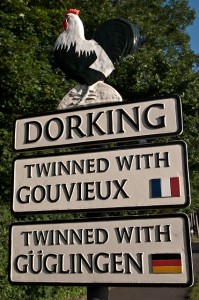 Building on this success, links were established with the German town of Güglingen in Baden-Wurttemberg – again, a town with similar topography, economy, environment and interests. The twinning arrangement here was established in 2007.

The exhibition shows more about the life of these two twinned towns and the links and good friendships that have been developed in both directions. It provides an opportunity to understand these as real communities, not just names on the road signs at the entrance to Dorking.