Dorking’s youngest military casualty in the First World War is often said to have been Joe Strudwick who was killed at the age of 15 years and 11 months on 14th January 1916.

Strudwick was born in Falkland Road on February 14th 1900 and so named Valentine, though he was known as Joe. He later moved with his gardener father, Jesse and laundress mother, Louisa (nee Fuller) and siblings to Orchard Road. After leaving St Paul’s School he probably worked for his uncle, a coal merchant, and in other manual work.

Valentine Joe Strudwick enlisted in January 1915 in Lambeth, Surrey.  He lied about his age. At the time of his enlistment he was only 14 years old and said to be living at Croydon, Surrey. He became part of the 8th Battalion Rifle Brigade (the Prince Consort´s Own). He was a rifleman – regimental number 5750.  Valentine disembarked in France on the 12th of August 1915.

Valentine Joe died in action at Boezinge, West Flanders in Belgium on Friday 14th of January 1916. He was not yet 16 years old and became one of the youngest battle casualties of the war.

Louisa, living at the time at 70 Orchard Road, Dorking Surrey, received the letter with this sad news explaining that Valentine was killed by a shell. He died painlessly and quite instantly. Fellow soldiers carried him to a little cemetery behind the lines where he was buried the next morning (the 1916 Dorking and Leatherhead Advertiser).

He is buried at the Essex Farm Cemetery at the plot I. U. 8.  The land south of the Essex Farm was used as a dressing station cemetery from April 1915 to August 1917

Valentine´s mother Louisa chose the inscription on the headstone: “Not Gone From Memory  Or From Love”.

He received the Victory Medal, the British War Medal and the 1915 Star Medal.

Valentine’s oldest brother Jesse Strudwick enlisted into the Army on the 6th of November 1915. He became part of the 6th Battalion Reserve Brigade Royal Field Artillery. He was a gunner. His regimental number was 121109. Jesse was discharged on the 3rd of July 1916 on medical grounds (sickness).

The report of the boy’s death in the Dorking and Leatherhead Advertiser on 22nd January 1916 seeks not to question how a boy of such youth came to be serving, but uses his example to shame reluctant older men into joining up. The piece also reveals how both press and officers were keen to report death as instantaneous and painless for the public back home:

‘Another Dorking lad has achieved honour by laying down his life for his country.

Pte. Valentine Joe Strudwick, of the 8th Rifle Brigade, joined up twelve months ago last January, and at the time of his death, on Jan.14th he had not reached his sixteenth birthday, he having been born on St. Valentine’s Day, 1900.

His mother would naturally have liked to have kept him out of the Army for at least a year or two, but young Strudwick would not have it – a fine example to those of maturer years who have not yet joined, and perhaps a reproach?

With only six week’s training the lad was sent over to France. Within a short time he lost two of his chums who were standing next to him – both instantaneously killed. The shock was such, with the addition of being badly gassed, that he was sent home and was for three months in hospital at Sheerness. On recovering he rejoined his regiment in France, and this week his mother received the following letter from his commanding officer, dated Jan.15th:

‘I am very sorry indeed to have to inform you that your son was killed by a shell on Jan. 14th. His death was quite instantaneous and painless and his body was carried by his comrades to a little cemetery behind the lines, where it was reverently buried this morning. A cross is being made and will shortly be erected on his grave. Rifleman Strudwick had earned the goodwill and respect of his comrades and his officers, and we are very sorry indeed to lose so good a soldier. On their behalf as well as my own I offer you sincere sympathy.’

The deceased was Mrs Strudwick’s second surviving son, and her grief is the greater because of the fact that she had not been able to see him since he joined the Army. She has another son in the Royal Field Artillery.

Excerpt courtesy of the Dorking Advertiser

Valentine Joe Strudwick was born in the 1st quarter of 1900, in Dorking, Surrey to Louisa Strudwick nee Fuller and jobbing gardener/labourer Jesse Strudwick. According to the 1916 Dorking and Leatherhead Advertiser the name Valentine derived from the date he was born: the 14th of February, Valentine’s Day.

During the 1881 Census, George Fuller, Susan Fuller and their children Louisa, George Frederick and Jesse Ann lived at Church Gardens, Dorking, Surrey.  George was working as a lime burner and Susan was a laundress.

At the time of the 1881 Census, Charles, Rosetta Strudwick and their children Jesse, Ellen, William Charles, Rosetta, Alfred, Lilly, Minnie and Joseph lived at Falkland Road, Dorking. Charles was working as a labourer and Jesse as a jobbing gardener.  The family had also a boarder James Roker.

The 1891 Census shows Valentine’s parents Jesse and Louisa living with Daisy Ada and Alice Rosetta at 7 Spring Gardens, Dorking. Jesse worked as a gardener and Louisa as a laundress.

Valentine´s mother Louisa was living at the time of the 1911 Census with her children Valentine Joe, Charles Henry, Jack and Dora Louisa at 63 Orchard Road, Dorking. Louisa stated that she was married and was working as a laundress. Out of Louisa’s stated nine children, only six lived. The accomodation had two rooms.

Valentine´s father Jesse lived at the time of the 1911 Census as a lodger at Mrs Rosa Clark a laundry woman, widow at 13 Church Gardens, Dorking, Surrey. He stated that he was married and was working as a gardener.

Valentine Joe was a pupil of St Paul´s School in Dorking (the 1916 Dorking and Leatherhead Advertiser).

Aubrey Hudson of Newdigate died on 28th July 1916 at just 15 years and one month. 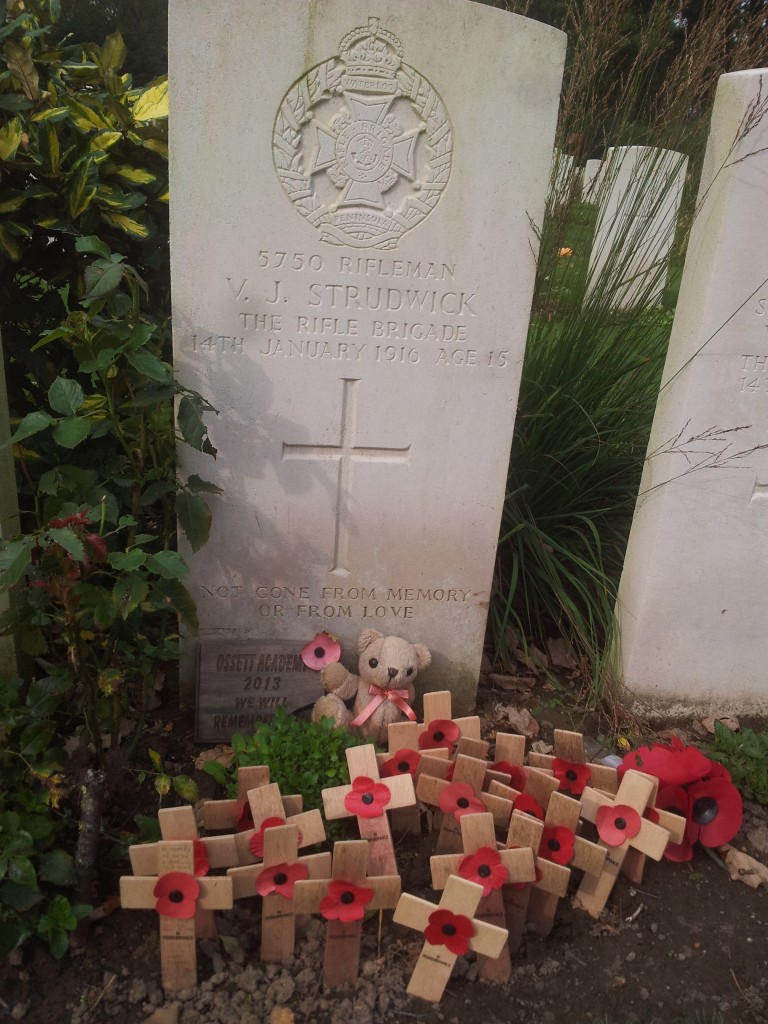