‘The nicest place, within a prudent distance of town, in England’ 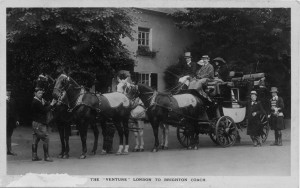 So wrote the playwright Sheridan of Dorking in 1797. As coach travel became faster and more comfortable, the town developed a reputation amongst wealthy Londoners as a holiday resort. Its good air and picturesque countryside were recommended to invalids.

The King’s Head and the Red Lion were famous for their ‘Water Souchy’, a fish stew made from perch, carp or tench, onions and parsley. The name probably comes from the Dutch ‘waterzootje’ as the dish was popular with visiting Dutch merchants.

When the Romantic Movement popularised communing with nature, Box Hill became a popular destination: John Keats completed Endymion(1818) whilst staying at the Burford Bridge Hotel (then known as the Fox and Hounds); Nelson visited in 1801 and John Stuart Mill rented a cottage at Mickleham in the 1820s.

Box Hill is the setting for one of English literature’s best known scenes, the picnic in Jane Austen’s  Emma (1816). Austen knew Box Hill well; she visited her cousin who lived at nearby Great Bookham several times. Emma’s picnic is typical of visits to Box Hill in the early 19th century. The wealthy visitors arrive by carriage and eat in the open air – a recent innovation for the wealthy that gives the event an air of daring 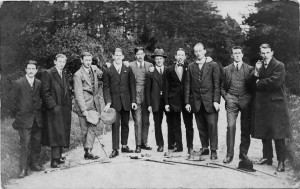 A rambling club on Ranmore before the First World War. 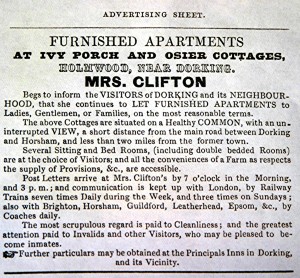 Locals rented out their houses for the summer, inns hired out horses and carriages, and the town produced its own refreshments – ginger beer and mineral waters.