The Horsham and Epsom Turnpike Act 1755 allowed local landowners to set up a trust to construct a new road. The Evelyns of Wotton and the Howards of the Deepdene were amongst those who borrowed money secured against future tolls to fund construction.

This map by Moggs of 1818 shows the turnpike road and toll gates. The climbs, particularly onto Holmwood Common, were steep. But descents could be treacherous: in 1777 a servant died under the wheels of a wagon and in the same year a man was run over by a fish cart. In both cases the wagon and horses responsible were forfeited. 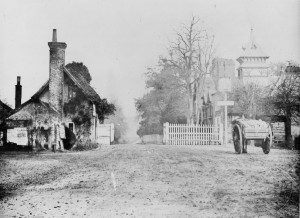 From Leatherhead the new road followed the Mole to Mickleham. At the Fox and Hounds (now the Burford Bridge Hotel) it entered the town from the north-east across Denbies. From South Street it climbed Holmwood Common to where St John’s church now stands. Descending to what is now mid-Holmwood, it continued towards Beare Green, Capel and Horsham. There were toll gates at Giles Green (just north of Dorking), on Flint Hill and at Holmwood Corner.

The photograph shows the toll gate at Giles Green, near the Beehive to the north of the modern Pixham roundabout. Local people tried to avoid the charges, keeping to the by-ways or avoiding the tollgates: in 1775 four men from Leigh were fined £3 for avoiding payment at the Holmwood gate. Image: Dorking Museum 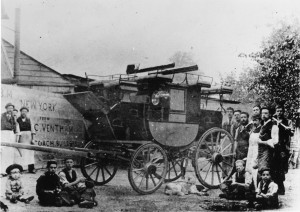 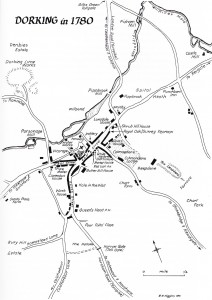 The town’s other roads were maintained by the parish and parishioners had to work on the roads for a certain number of days a year – unless they were wealthy enough to provide a horse and wagon instead.