Many thanks to Jemma Offley for this research

William Mansell was born to Michael and Sarah Mansell (previously Sturt) on the 26th June 1873. Michael Mansell was working as a labourer on a yard (Sarah not in employment), although it appears William was born out of wedlock, with their marriage taking place on the 12th September 1874 in Ewhurst. Living in 29 Peaslake Lane, just south of Shere in the borough of Guilford (William’s birthplace), the 1881 census shows him as a scholar with 4 younger siblings also living at that address.

William grew up to be a bricklayer and gardener, marrying Alice Mary Wood on Christmas Day 1894 in Shere, St James Church. Alice was living at 144 Peaslake Lane according to the 1891 census, which also tells us that William’s family were living at number 140 (although William is not listed to be living with them), showing it is likely the couple met by living so close. William is registered as a labourer, possibly in the same line of work as his father, who is registered as the same.

In 1911, the couple have moved to St John’s Road in Westcott, with William still working as a bricklayer, and showing no military involvement. This is most likely because the age criteria for enlisting in the army were 18-38, William being aged 41 in 1914 and thus not eligible for conscription. He continues his life with his wife and children until 1918 where he then decides to enlist into the newly formed Royal Air Force (created 1st April 1918).

Below is the service sheet for the Royal Air Force, showing William’s involvement in the war. He attested on the 24th August 1918, possibly as a result of the 1918 Conscription Crisis and the threat of the German Offensive after the defeat of the Russians in 1917. He is described as being 5’5’’, with dark hair and complexion. His service number was 288455, which confirms his enlistment between July and September 1918 as a Second Class Airman of the RAF, the lowest rank in the Air Force (previously the air mechanics of the RFC). It appears he never entered active service, completing training at Catfirth in Shetland (RAF base used from June 1918 to September 1919) and transferring to Crystal Palace Discharge Centre on the 10th February 1919.  He died on demobilised furlough on the 17th February 1919, possibly of illness or old age.

William Mansell is buried in Dorking Cemetery, his name engraved on a headstone commissioned by his wife, Alice along with the words “Until We Meet Again”. His wife continued to live in Dorking in 9 Spring Cottage, South Holmwood, dying on the 29th November 1958. 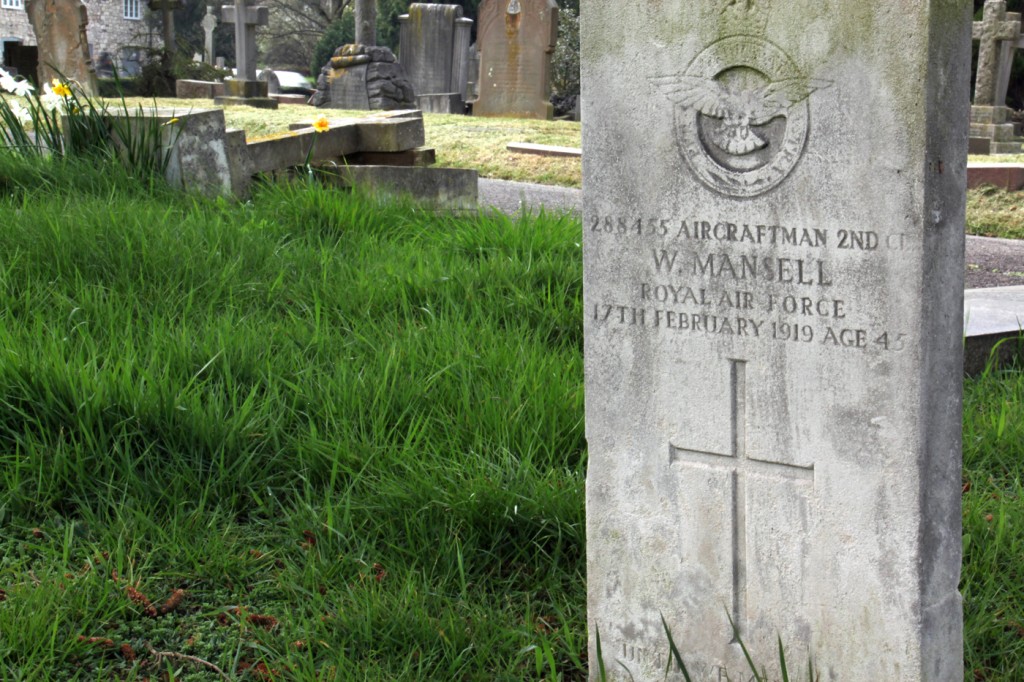