On the outbreak of the war Mrs Pankhurst announced that the militant suffragette movement would give up campaigning. She set about recruiting for troops. But war only strengthened the determination of others to continue to fight for women’s influence in national affairs. The state of ‘ruin’ which the nation was in, commented Votes for Women magazine, was the result of a world ordered and managed by men alone. Emmeline Pethick-Lawrence, the magazine’s Holmwood-based editor, carried on campaigning for the vote throughout the war. 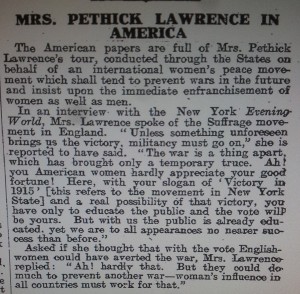 In November 1914 Emmeline went on a speaking tour of the neutral United States arranged by the international women’s peace movement. In New York she told supporters that the campaign for the vote must go on. She did not think that the war would not have happened had women the vote, but she did think that women’s influence could work to prevent war in general.

This message found a sympathetic audience with New York women keen to win the vote and not to become embroiled in a European war.