2018 sees celebrations to mark the centenary of the grant of the vote to women in Britain. Dorking Museum has marked the occasion by installing a commemorative plaque on the home of two of the most significant campaigners for the vote for women, Frederick and Emmeline Pethick-Lawrence, who lived at the Dutch House in South Holmwood, Surrey.

The Pethick-Lawrences were integral to the leadership of Mrs Pankhurst’s militant Women’s Social and Political Union, known as the ‘suffragettes’. For six years, between 1906 and 1912, Emmeline Pethick-Lawrence acted as the organization’s treasurer, providing the stable leadership that allowed the Pankhurst campaign to flourish. She was always at Mrs Pankhurst’s side, marching beside her, and responsible for most of the running of the organization.

She and her husband’s London home became the organization’s headquarters and their Surrey house its unofficial country home, where tactics were formulated and women recuperated from forcible feeding. 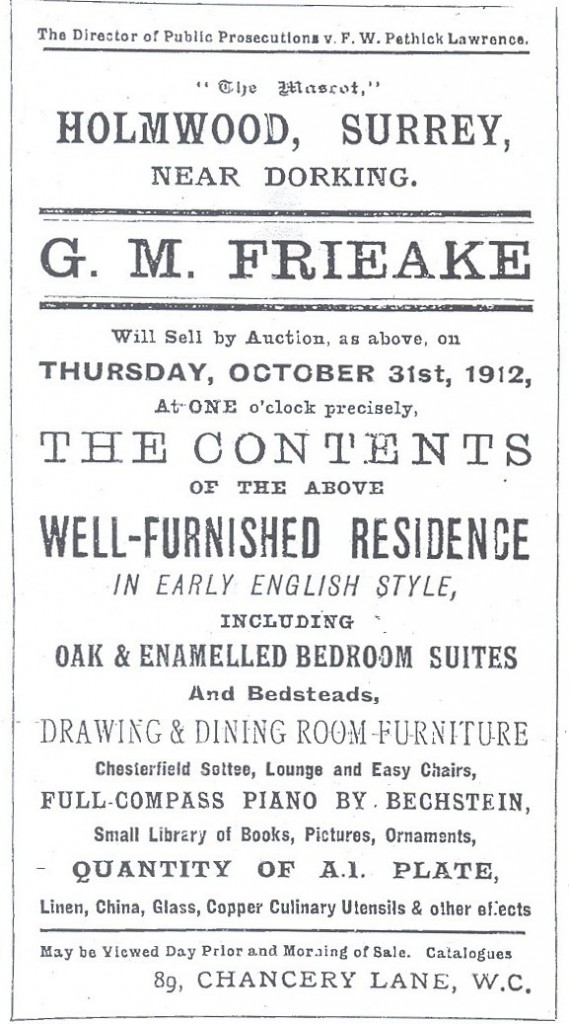 The house was at the centre of dramatic events in 1912 when the government sued the couple for the costs of their trial for conspiracy, putting bailiffs into the house and selling the contents at public auction. The WSPU ran a 6 week-long campaign in Dorking and the surrounding villages to protest at the injustice of these actions. Emmeline was imprisoned six times for the cause. Also imprisoned, her husband was nicknamed ‘Godfather’ by the women, standing bail for hundreds with his own money. He was the only man to play a significant role in the WSPU.

Emmeline’s significance goes beyond the campaign for the vote. She was a renowned social campaigner before her involvement with the Pankhursts, at the forefront of the English folk song and dance revival with her Esperance Club for working class girls. She was one of the leading peace campaigners during the First World War and a founder member of the Women’s International League for Peace and Freedom. She stood for Parliament in 1918, and led the Women’s Freedom League in its campaign for equal voting rights for women. When that was achieved in 1928 she spent the rest of her life promoting economic, legal and social freedoms for women. Fred went on to become a Labour MP and spent his life promoting social equality and the cause of Indian Independence. In 1945 he became Clement Attlee’s secretary of state for India, and, as Lord Lawrence of Peaslake, was key to independence negotiations. In tribute Attlee acknowledged how unusual it was for one man to have played a leading part in two great movements of liberation.

Emmeline Pethick-Lawrence was once sufficiently well known to be depicted in wax at Madame Tussauds, and, until recently a small plaque used to sit outside Pethick-Lawrence House in Dorking. It proclaimed that that the work of Fred and Emmeline for the emancipation of women and for world peace would be remembered by countless generations. With the closure of Pethick-Lawrence House in 2016, there is now nothing to mark the significance of the couple anywhere, other than as a footnote to a plaque at Clement’s Inn in London, marking the spot of the WSPU’s national headquarters – the Pethick-Lawrence’s London home.

Money was pledged by Royal Holloway, University of London, as part of its Citizens 800 project. Donations were also made by interested individuals and groups who wished to ensure that the extraordinary contribution of Frederick and Emmeline Pethick-Lawrence to the fight for democratic representation in Britain, and their contribution to national life and political debate in many other areas, is not forgotten.

Julie Rand and Laura Hales from Cycling UK cycled from Guildford to Dorking on their mountain bikes to join us for the unveiling of the Plaque. Here is Julie’s account of their ride. https://www.cyclinguk.org/blog/riding-surrey-hills-trail-suffragettes … 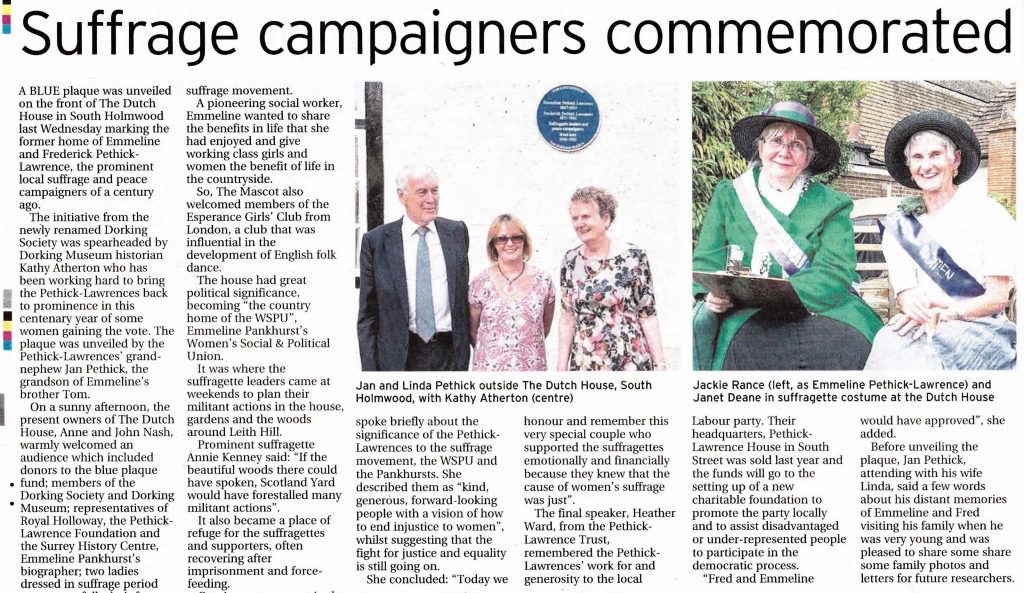 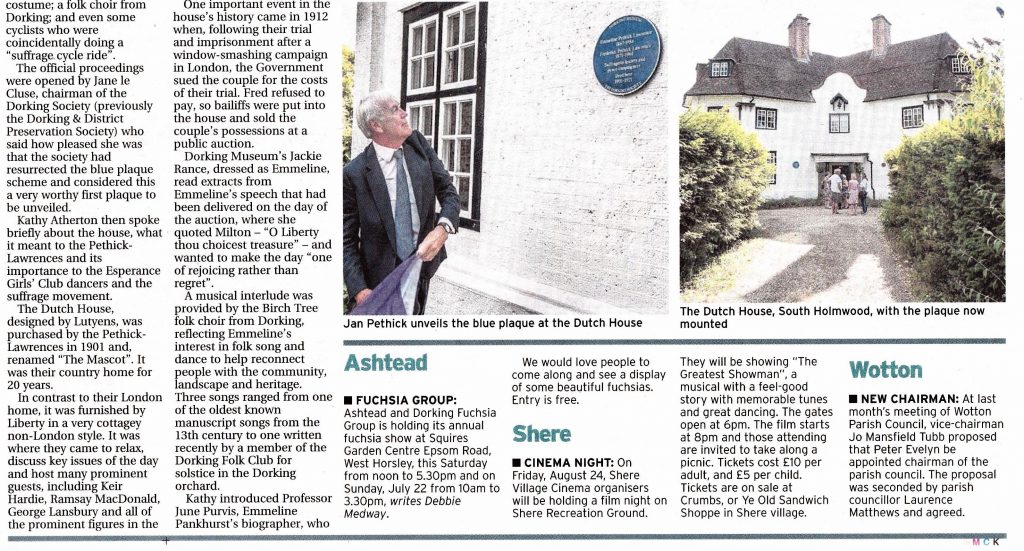