Dorking Museum is extremely grateful to John Callcutt for sharing his expertise and research. Museums rely on the enthusiasm which inspires John and others like him to devote so much of their spare time to unearthing the otherwise forgotten stories which make up our past. With his work on the First World War John has paid tribute to the sacrifice of the men and women who marched away.
Nigel Arch LVO – Dorking Museum Chairman 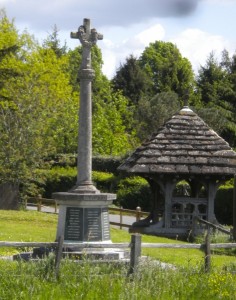 A meeting was held on the 11th March 1920 to discuss the erection of a war memorial to commemorate the young Newdigate men who had fallen in the Great War.

It was proposed by Mrs Janson, seconded by Col. Nicholls and carried unanimously,

‘that a faculty be procured for the erection of a war memorial cross in the churchyard of St Peter’s, Newdigate and that the cross be as per design already sent to advisory committee of the diocese of Winchester and be made of Portland stone by Messrs. Gilliam Sons, Dorking at an estimated cost of £180 of which the sum of £160 has already been collected and the remainder guaranteed. The inscription round the edge of the cornice of the octagon base to be ‘To the Glory of God and in grateful memory of our gallant Newdigate men who fell in the Great War, 1914-1919’. In Church text, letters 1½ inches, the 33 names to be alphabetically arranged and engraved on the three frontal panels of the base and capital letters 1 inch, other letters ¾ inch.

Fleur de Lys (the Newdigate crest) to be carved round the capital of the column which supports the cross and wreath of laurel leaves to be carved and placed over the centre of the cross where the arms meet.’

The work was duly carried out and 32 not 33 names, with their ranks, were carved on the three frontals.

After the Second World War the carved names were covered by engraved plates which list the men without ranks, and an additional plate bearing the names of the ten fallen men of the second war were added. Also the dates 1939-1945 were added on the last remaining empty section of the octagon.

It is not known how or by what criteria the names were selected.

In the vestry of the church there is a small wooden carved memorial commissioned by Mrs Janson to commemorate those who had died from her carving class. It reads as follows:

Newdigate Carving Class
In Praise and Honour
of

It is still possible to identify some of the handicraft done by some of the men as the carvers of the motifs on the pew ends are recorded. Percy Weller carved the fish of St Peter, the dove of the Holy Ghost and the lily of Mary, Arthur Monk did the fleur de lys and the anchor and shield of St. Nicholas and Raymond Potter who was seriously wounded at Gallipoli carved the Christ monologue.