Arthur Walters was born in the 2nd quarter of 1897 in Byfleet, Surrey, the only son of gardener Levi and Mary Jane nee Crane.

At the time of the 1901 Census, the family lived at 2 Westcott Street, Clarendon Terrace, Westcott, Surrey. Levi was working as a gardener and Mary Jane was looking after Arthur. The house was also occupied by a tenant, district nurse, Louisa M. Taylor.

At the time of the 1911 Census, the family lived at 1 Shermanbury Cottages, Harrow Road, Dorking. The household was occupied by gardener Levi, Mary Jane and Arthur. The accommodation had five rooms.

Arthur’s mother Mary Jane died in 1912 and was buried on the 10th of December 1912 at St Martin’s in Dorking. At the time of her death she lived in Tower Hill, Dorking.

Arthur attested on the 7th of December 1915 into the Queen’s Regiment. He was a Private with regimental number 3253. At the time of his attestation he was working as a gardener and lived at 1 Shermanbury Cottages, Harrow Road, Dorking. He was 18 years old.

On the 8th of December 1915 he was made a reservist and mobilised on the 9th of October 1916. On the same date he was posted to the 2nd / 6th (Cyclist) Battalion, Norfolk Regiment. His new regimental number was 266139 and he was still a Private. He served at home.

Arthur Walters died suddenly of pneumonia on the 21st of September 1918 at The Manor War Hospital in Epsom. Between 12th of August 1916 to 1st of April 1919. The Manor was used to treat military casualties.

Arthur was buried at the Dorking Cemetery on the 25th of September 1918. His grave reference number is 19.99.69. His gravestone bears the inscription ‘Peace Perfect Peace’.

Arthur’s father Levi received £8 and 7d on the 29th of January 1919 and a further £6 on the 17th of December 1919 in Soldier’s Effects. Levi remarried widow Alice Louisa Sawyers on the 18th of October 1919 at St Paul’s in Dorking. The couple lived at 1 Shermanbury Cottages. At the time of his marriage Levi was working as a gardener. Levi Walters died in 1935 and was buried on the 14th of September 1935 at St Martin’s in Dorking. At the time of his death he lived at 2 The Almhouses in Dorking. 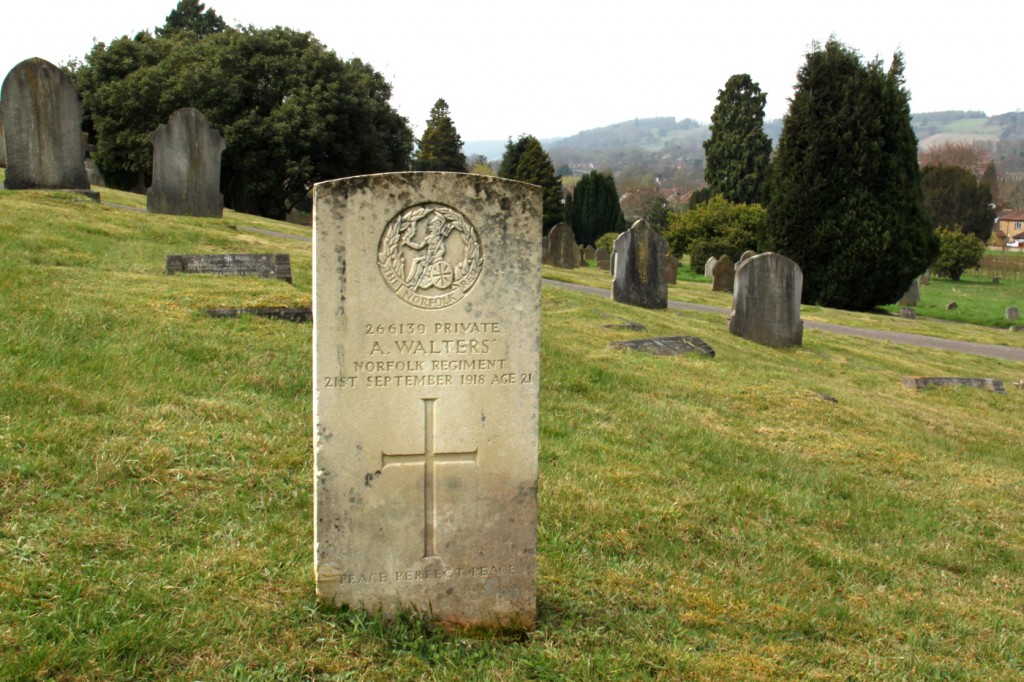