Job Tickner was born on the 21st of January 1894 in Bletchingley, Surrey to carter Job Tickner and Emily Matilda Weller.

Job’s father Job Tickner was born in the 4th quarter of 1869 in Horsham, Sussex to Emily Tickner. He was baptised on the 20th of March 1870 in Rudwick, Sussex.

At the time of the 1881 Census, Emily Matilda Weller was working as a general domestic servant to farmer William Batchelor of Wattlehurst. In the 3rd quarter of 1886 she gave a birth to Arthur Edward. W. J. Weller.

Job Tickner and Emily Matilda Weller married in the 3rd quarter of 1893 in the Registration District of Dorking.

Gilbert Tickner had brown hair, blue eyes and a fresh complexion. He also had a clasped hands and horseshoe tattooed on his left forearm. Before WW1 Gilbert was working as a carman. Gilbert Tickner enlisted into the Royal Navy. His service number was K46513. His first date of navy service began on the 13th of October 1917 on the HMS Pembroke II. On the 3rd of April 1919 Gilbert finished his service on the HMS Prince George.

Job Tickner also had one step brother: Arthur Edward W. J. Weller/Tickner. Arthur Edward was born in 1886 in Dorking. On the 16th of September 1904 in Guildford he enlisted into Army Service. At the time of his enlistment Arthur Edward worked as a fettler. He became part of the 2nd Battalion the Queen’s Royal West Surrey Regiment. He was a private with a regimental number L/8163. On the 25th of April 1908 he married Elizabeth Upward. At the outbreak of WW1 Arthur Edward was transferred to the 1st Battalion, Queen’s Royal West Surrey Regiment and embarked on the 12th of August 1914 on the SS Breamer Castle from Southampton to France. The 1st Battalion the Queen’s were engaged in the 1st Battle of Ypres in Belgium (19 October – 22 November 1914). Arthur was reported missing and is considered dead from or since 31st of October 1914. His body was never found and he is commemorated at the Menin Gate Memorial to the Missing in Ypres, Belgium.

At the time of the 1901 Census, the family lived at 13 Ansell Road in Dorking. Job Tickner was working as a builder’s carter and Emily was looking after their children: Job, Beatrice Emily and Gilbert. With the family also lived Job’s step-son Arthur Edward Weller/Tickner, who worked on a farm.

On the 25th of February 1907, Job Tickner was admitted into the St Martin’s Church of England School in Dorking for boys. At this time the family lived at 13 Ansell Road in Dorking. It was stated, that Job previously attended St Paul’s School. He left St Martin’s School on the 17th of January 1908 for the given reason of age exemption.

At the time of the 1911 Census, the family still lived at 13 Ansell Road in Dorking. Job was working as a carman and Emily Matilda was looking after their children: carman Job, Beatrice Emily, Gilbert and Henry. The accommodation had five rooms.

Job Tickner had a fine record of bravery and was awarded the Military Medal in November 1916. As a stretcher bearer he risked his life to save a wounded Captain.

On the 4th May 1917, Job went out to succour a wounded officer at Arras in France, when he was hit in the back by a sniper. The bullet lay embedded near the spine. The wound was serious.

Job’s father Job Tickner went over to France to visit his son. The Dorking and Leatherhead Advertiser, issued on the 19th of May 1917, stated that at the time of the father’s visit the son was making “favourable progress” after extraction of the bullet. At this time the family lived at 7a North Street in Dorking.

Job was transported into the Halifax Military Hospital, where on the 16th of June 1917, he died from his wounds.

His death was reported in the Dorking Advertiser as follows;

BRAVE STRETCHER-BEARER’S DEATH.  The remains of Pte. J. Tickner, Queen’s Royal West Surrey Regt., a brave Dorking lad, who was one of the first to win the Military Medal, were laid to rest in the Dorking Cemetery on Wednesday afternoon. He died in St. Luke’s Hospital, Halifax, on Saturday, where he had been suffering from a wound received while trying to succour a wounded officer in May last. A stretcher bearer, he was bandaging the officer’s wound when he was hit in the back by a sniper, the bullet lodging near the spine.

Pte. Tickner had previously distinguished himself by his bravery. This was in November last, when he went out at great personal risk and brought in a wounded officer. It was for this act he was awarded the Military Medal.

The body was covered with the Union Jack, and soldiers from the Depot at Guildford acted as bearers. Among those present was Mr. A. Saunders (Messrs. Meakins and sons, in whose employ the deceased was before he joined up), and the firm’s employees, while the Dorking firemen also attended out of respect. The wounded soldiers who were attending the fete in Pippbrook grounds lined up outside as the cortege passed, and respectfully saluted the remains of their late comrade.

Job Tickner was buried on the 20th of June 1917 at the Dorking Municipal Cemetery. His grave reference number is: 17.9495.

He received the British War and Victory medals and the 1915 Star.

By 1919 his family had moved to 24 Marlborough Road in Dorking. 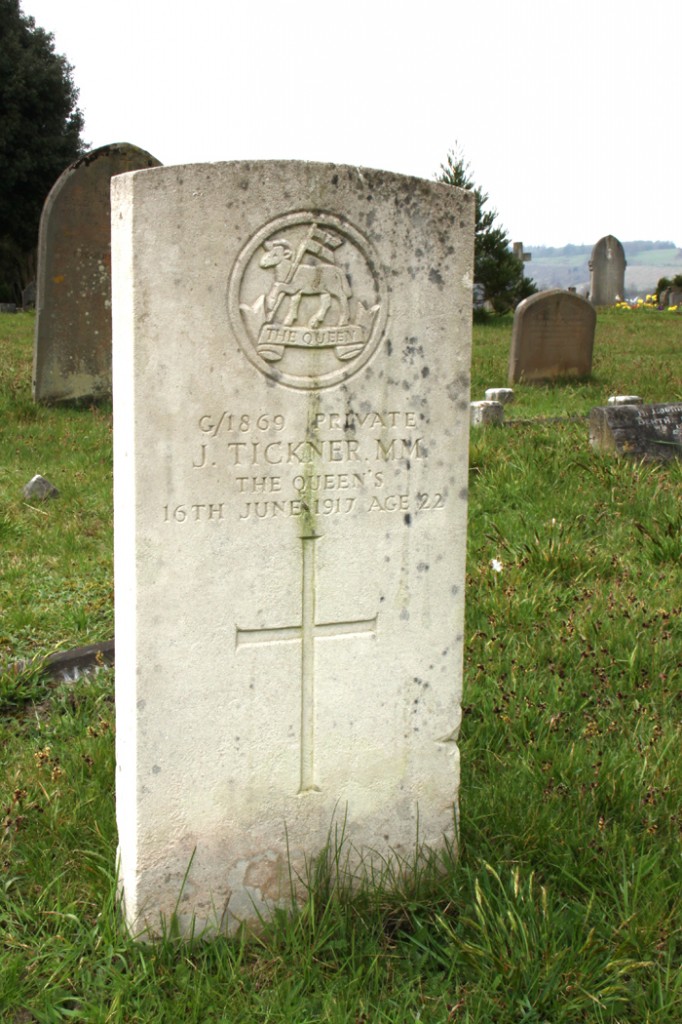