The Dorking and District Refugee Committee

In 1938 the novelist EM Forster and the composer Ralph Vaughan Williams set up the Dorking and District Refugee Committee to help people fleeing Nazi Germany. 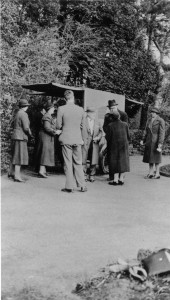 Refugees were housed at Clarendon House and at Fairhaven in Holmbury St Mary until the Duke of Newcastle offered Burchett House rent-free as a hostel. There the refugees received loans, medical assistance and help with finding work and housing.

When war was declared in September 1939, Dorking’s German nationals faced internment as enemy aliens and the Committee helped them apply to Home Office Tribunals to remain at liberty. One of these was former women’s magazine journalist, Erika Schmidt-Landry, whose writer husband was interned in the Isle of Man. Forster and Vaughan Williams took up her case when she was faced with putting her 3 small children into an orphanage.

The photograph shows the Dorking Women’s Voluntary Service with the mobile canteen which provided sustenance to those coming into Dorking.  The Dorking Congregational Church arranged lodgings with local families for Londoners bombed out of their homes. 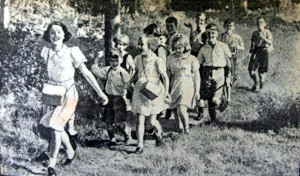 3,000 evacuee children from South London arrived at Dorking station in September 1939. They were taken by bus to Dorking Halls where they were given a medical examination and a paper bag containing rations for 48 hours – condensed milk, tinned beef, biscuits and chocolate.

Photographs of smiling evacuee children were published in the Telegraph and Daily Mail to reassure the public. Reports did not reveal the children’s location – South Holmwood. ‘I didn’t know a holiday in the country could be so lovely. I shall always remember it,’ wrote one boy from Sydenham of his time there. 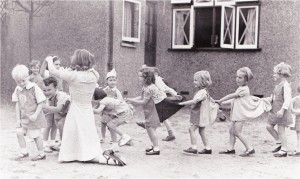 Local schools struggled to absorb the influx. Some worked double shifts, others took lessons outside. The children were inspected. Some from poorer areas were infested with lice: ‘disgusting – you have my sympathy’ wrote the chairman of South Holmwood School to the head. But the evacuees also had complaints: one girl was billeted with a woman of 80, others had to sleep on the floor. Mothers with young children were often required to leave host houses in the morning, roaming the streets until they were allowed to return at night. The Dorking Nursery School in Junction Road was set up by the Women’s Voluntary Service in early October 1939 to provide a place for evacuee children to go during the day when many pre-school age children, who were accompanied by their mothers, were required to leave their billets.