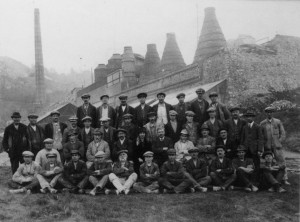 Local clay has been dug for hundreds of years. In the 1790s George Miller of Ram Alley (now Dene Street) obtained permission to dig clay from the common at North Holmwood to produce drain pipes, roof tiles, plant pots, bricks, and chimney pots. The area became known as the Potteries and the village pond is a result of Miller’s clay diggings. 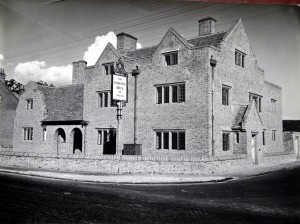 The Dorking Brick Company’s offices on the corner of Spook Hill and Holmesdale Road were re-faced and extended in 1931 as a showcase for what could be achieved in brick. 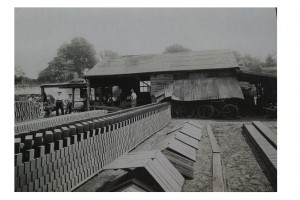 Later the clay was used to make bricks. Kilns were set up at Stubs Farm between Dorking and Holmwood in the 1870s. By the 1920s the Dorking Brick Company’s site stretched from North Holmwood to Blackbrook and was surrounded by terraced brick housing. With further premises at Beare Green, the company employed 60 to 70 people, and used a small railway to move the bricks about the works. Dorking bricks were used all over the south-east, in local housing and in the construction of the Middlesex, St Bartholomew’s and Surrey County hospitals. 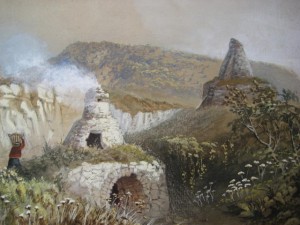 Used as an ingredient in making mortar, Dorking lime was considered by many to be the best in the county. Mixed with [cement, sand] and water, Dorking lime was used to fix together the stones and bricks which make up Somerset House and the Bank of England in London. Its hardening qualities in water were so good that it was also used in the construction of West India and London Docks in the port of London.

Lime is extracted from chalk by burning in kilns. For generations farmers had burned chalk from the North Downs in small kilns in the corners of their fields, spreading the resulting lime across their land to improve its quality. The Dorking chalk pits at Bradley Manor Farm were in operation from the 1600s. The chalk was burned at 6 large kilns up Chalkpit Lane, below Ranmore Road opened. Today the municipal dump occupies part of the site.

With the coming of the turnpike road, Dorking lime could be transported to London. The lime would first be sent by wagon to Kingston by wagon, where it was loaded aboard barges and sent along the Thames to London. On the return journey, coal would be brought to power Dorking’s kilns.

In the late 18th and early 19th centuries chalk pits were opened at Brockham and at Betchworth, where the Betchworth Dorking Greystone Lime Company traded on the renowned Dorking name. Production continued until the Second World War but ceased when lighting restrictions came into force.