In the 1870s Sidney Boorer, a delivery boy for Fullers, cycled his clanking velocipede or ‘bone shaker’ from Denbies to Dorking after delivering a repaired sewing machine. In the dark, with glow worms attached to his hat, he frightened the returning housemaids. But soon the sight was a common one. Fuller’s cycle workshop opened in 1892. Staff sold and rented bicycles and gave cycling lessons.

Saubergue was one of the first locals to buy a velocipede in 1868. Saubergue’s ironmongery workshop was situated on the site of Sainsbury’s. In 1870 he and three companions went on a cycling tour of Germany on the newly invented ‘penny-farthings’.

A cycle party outside the Queen’s Head, Dorking. Not all inns were welcoming to cyclists: in 1899 the Burford Bridge Hotel attempted to charge Capel Cycling Club for each cycle left outside.

In the 1890s Dorking’s cyclists’ camps were well known, their activities covered by the national press. Hundreds of cyclists from clubs from all over the south-east camped for 2 weeks at Poultry Farm, near St Paul’s school. Each club had a marquee as well as bell sleeping tents. Other tents housed local barbers, machine repairers, a post office and refreshments. In August 1896 over 6,000 people visited the camp, the highlight of which was a torchlight procession of cyclists in fancy dress through the town, lead by the town band.

Dorking Cycling Club at Mr Attlee’s house on Rose Hill in the 1880s. The club was formed in 1887 and members were so appreciative of the council’s road maintenance team that in 1896 they entertained 30 of them to supper.

Cycling gave women independence. Margaret Pennington, a campaigner for women’s rights who lived at Broome Hall near Coldharbour, hailed the bicycle as ‘nothing short of a social revolution’. But not all were in favour; in 1898 the landlord of the White Horse on the High Street made the national papers when he refused to admit a female cyclist in ‘bloomers’. 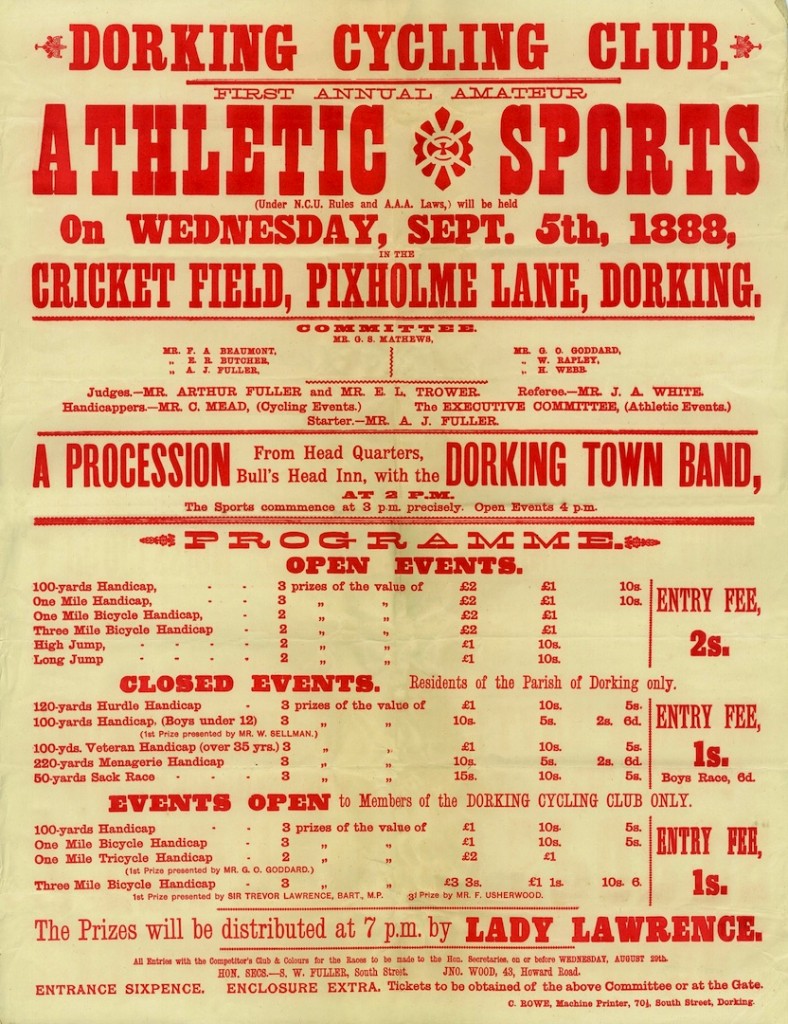 Next : Clay, Bricks, Chalk and Lime