The Victoria Cross is Great Britain’s highest military award for bravery. Dorking citizens are among those who have received this prestigious decoration. 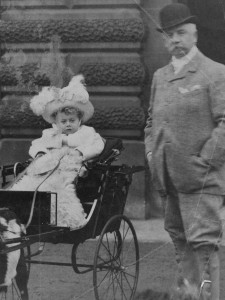 Sir William Leslie de la Poer Beresford VC was the son of an Irish Marquess. Nicknamed ‘Fighting Bill’, Beresford won the Victoria Cross at Ulundi in the Zulu war of 1879, rescuing a comrade whose horse had fallen on him by carrying the man to safety on the back of his own horse. When awarded the Victoria Cross, Beresford insisted that the sergeant who had held the injured man upright also be decorated. In later life Beresford lived at the Deepdene with his wife, Lily, Dowager Duchess of Marlborough, and their young son. Beresford was Lily’s third husband; she claimed to have married the first time (into the Vanderbilt family) for money, the second time (to the Duke of Marlborough) for a title, and the 3rd time for love. The image is of Sir William Beresford VC and his son at the Deepdene. When he died of peritonitis Lily gave £1,000 to Dorking Cottage Hospital in his memory. 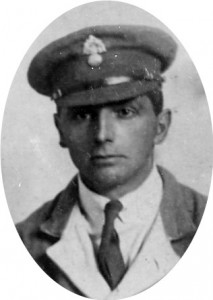 Born in Yorkshire, Lance Corporal Charles Graham Robertson VC came to Dorking as a boy when his father was employed as a gardener at Riverdale, Pixham. After attending St. Martin’s and Dorking High schools, Robertson joined the army and served in the Boer War. Robertson came to regard the Boer War as dishonourable and preferred to forget his part in it. A member of Old Dorking Swimming Club, Robertson became a railway booking clerk, and also played football for Dorking.

Robertson again saw action when the First World War broke out. In April 1918, near Ypres, Robertson halted a German advance until badly wounded in the stomach. For his valour, he was awarded the Victoria Cross.

Robertson and dignitaries on the presentation of his gold watch. Image: Dorking Advertiser

The local council was keen to honour Robertson, but Robertson refused any such adulation. He accepted a gold watch but asked that any other monies raised be put to charitable use. In December 1918 thousands turned out to watch him process by horse-drawn carriage to the Red Lion Hotel where the presentation was made. After the war Robertson returned to the railway. During the Second World War Robertson was back in uniform as a sergeant in the Home Guard.