In the Long Room at Lord’s cricket ground there hangs a painting of Dorking in 1770-80, showing a game of cricket in progress on Cotmandene. This painting is one of the earliest depictions of the game. The painting, by James Canter, shows the hills around the town dotted with mansions including the Deepdene, then home of Charles Howard, 11th Duke of Norfolk, on the hill to the rear. 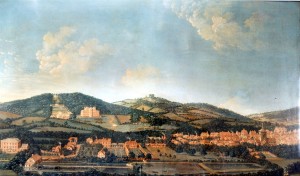 Dorking by James Canter around 1770-80. By permission of the Marylebone Cricket Club

Cricket was born in Surrey, Sussex and Kent. The first recorded local game was at Mickleham Downs in 1730. By the 1760s it was well established on the Cotmandene (though the players depicted probably used only two stumps and a curved bat and may be using only one wicket). The pitch measured one chain in length (as today) but an over would last four balls and a match would usually be completed in one day. The row of tents along the side of Cotmandene provided refreshments to the spectators and gamblers who financed such matches. 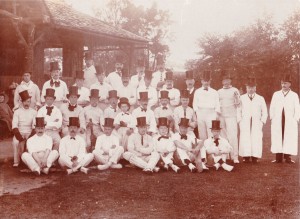 In 1845 a new ground on Mr Hope’s land at Betchworth became home to Dorking’s gentlemen players; the lower orders continued to play on the heavily sloping Cotmandene. Finally a suitable ground was established at Pixham – then remote from the town – at the instigation of Sir Trevor Lawrence of Burford Lodge in 1878.  Cricket has been played there ever since. Image: Dorking Museum 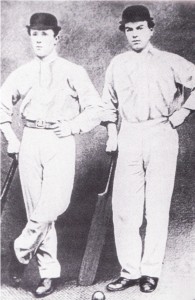 Legendary professional cricketer ‘Henry ‘the Pocket Hercules’ Jupp (1841-1889) was born on Cotmandene. He played for Dorking Balmoral club before being called up to play for Surrey, for whom he played for 20 seasons, in 1859. With his partner, Tom Humphrey (1838-1878), from Mitcham, Jupp scored an opening 100 four times in their first season at a time when Surrey County Cricket Club was the best in England. ‘The Surrey Boys’ both retired to Dorking: Jupp ran the Sun Inn and Humphrey moved to Westcott, managing the Ram Inn and then the Jolly Butchers (both in Dorking).