Thank you to Lenka Cathersides for this research.

Douglas Harold Denham was born in the 1st quarter of 1892 in Ramsgate, Thanet in Kent to clerk, professor of music and organist George Denham and Mary Denham nee Torr.

In 1881 Mary was working as a dried flower maker.

George Denham and Mary Torr married by Banns on the 4th of August 1883 at St Mary’s church in Islington, Middlesex. The Banns were called on the 8th, 15th and 22nd of July 1883 at the same church. At the time of the wedding George was working as a clerk and was living at 38 Hemingford Road in Islington. Mary was living at 59 Gipson Square in Islington.

During the 1891 Census, the family lived at Downs, St Lawrence, Ramsgate in Kent. George was working as a professor of music and Mary was looking after their children Alice Mary, George Torr, Stanley Thomas and Mary May. The family also employed a servant.

By the time of the 1901 Census, the family moved to Dorking in Surrey. They lived at Cliftonville in Dorking. George was a professor of music and organist and Mary was taking care of Alice Mary, George Torr, Stanley Thomas, Mary May, Douglas Harold, Herbert Spencer and Winifred Maud.

At the time of the 1911 Census, the family moved to 41 Avondale Road in Croydon, Surrey. George was still working as a professor of music, his wife Mary was at home and of their children Mary May was a vocalist; Herbert Spencer a student of music; Douglas Harold was an accountant clerk, Alice Mary was at home and Winifred Maud was at school. The family also had a boarder: teacher Florence Palmer. The house had 11 rooms.

Douglas Harold enlisted in London and became Lance Corporal of the 6th (City of London) Battalion (Rifles). His service number was 1847. At the time of enlistment he lived at South Croydon.

Douglas Harold disembarked on the 18th of March 1915 to France.

He died on the 25th of September 1915 during the great advance at Loos. His brother Lance Corporal Stanley Thomas Denham wrote to his parents: “Douglas had just reached the first German trenches, when he received his mortal wound. He died an hour later, and happily suffered no pain”.

He was buried at the Maroc British Cemetery, Grenay in France. A special memorial No 54 bears the inscription: “With Christ”.

According to the Dorking and Leatherhead Advertiser, Douglas “had been through many trying experiences, and on one occasion eight shells fell almost at his feet; not one of them exploded”. He lived in Dorking for 6 years.

Douglas Harold was awarded the British War and Victory medals and the 1915 Star. He is also commemorated at the South Street Memorial in Dorking. 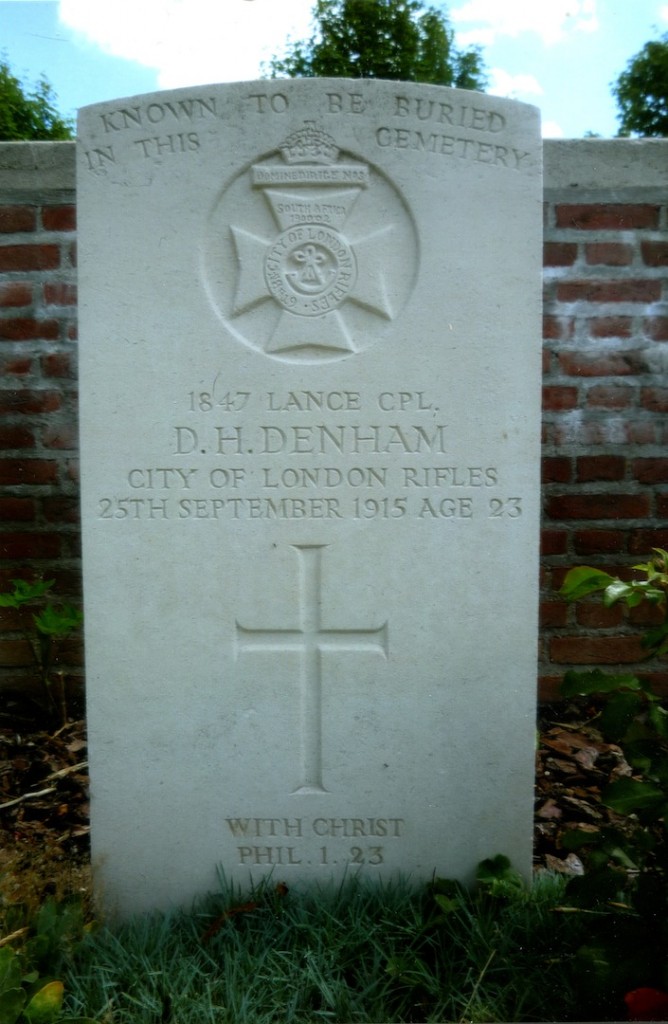