Cycling gave women independence. Suffrage campaigner Margaret Pennington of Broome Hall near Coldharbour claimed that the bicycle had been a great emancipation for women. ‘It is nothing short of a social revolution,’ she wrote.

Cycling had a long-term influence on women’s dress. Unable to cycle in heavy skirts, some experimented with the skirt and knickerbocker combination known as ‘rational’ dress. Not all local businesses were happy to welcome women’s increasing freedom, however. In 1898 the landlord of the White Horse on the High Street made the national papers when he refused to admit a female cyclist in ‘bloomers’.

Male clubs did not always encourage women members. So women founded their own clubs. In the 1890s the Mowbray House Women’s Cycling Club established a gypsy caravan on Leith Hill to provide washing, cooking and rest facilities to its female touring members.

The popularity of cycling was also regarded as a threat to attendance at church. But, commented the Dorking Advertiser in 1894: ‘the workers are after all entitled to a day’s rapture and good fellowship. 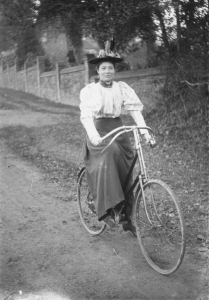 Mrs WJ Rose cycling in 1897. Mrs Rose worked for the tea magnate Arthur Brooke (of Brooke Bond) at Leylands near Abinger. Both safety and propriety had to be considered when cycling and women were advised to place lead weights in their hems to prevent skirts rising to reveal their legs. 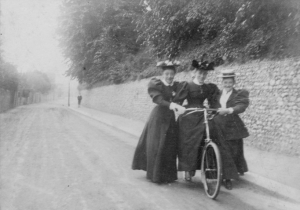 Mary, Eleanor and Emily Gumbrell learning to ride a bicycle in Vincent Lane, Dorking in about 1898. 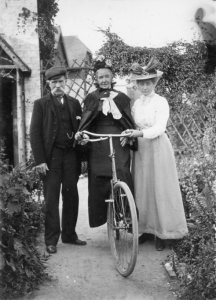 Friends of the Westcott photographer WJ Rose on a bicycle in about 1903. 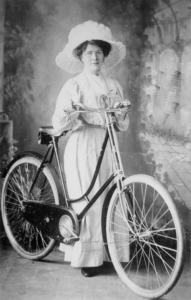 A relative of Dolly Rose of Westcott posing for a formal photograph with a new bicycle in about 1905.

Bicycle ownership had become aspirational and magazines featured wealthy people participating in the sport: In 1896 Lily, Duchess of Marlborough, and her husband, Sir William Beresford, were featured in The Cycling World magazine, cycling in the grounds of Deepdene.

Cycle clubs and events in the Dorking area continue to effect social change. During the 2012 Olympics Lizzie Armitstead took the silver medal in the women’s road race, raising the profile of women’s road racing. In torrential rain the people of Box Hill and Dorking turned out to cheer her on.

Unlike many traditional male-based clubs, Dorking Cycling Club is fully inclusive and supportive of women cyclists. The LycraBirds are named after their aerodynamic clothing – a far cry from knickerbockers and skirts. In 2014 club teenager Josie Shepherd came 5th in the National Junior Time Trial Championships – racing on public roads in a skin-tight racing suit.

The club also works to effect social change with innovative campaigns, such as the Zig Zag litter pick-up, the Smile and Wave campaign which aims to break down driver prejudice, and Bicycles with Balloons events which bring colour to the landscape.