The geology of Mole Valley was formed when the earth’s climate was warm and sea levels were high.

Between 65 and 100 million years ago southern England lay under a warm sea. The chalk of the North Downs was formed from the bodies of millions of marine plants and animals that lived there. A spectacular collection of fossil fish, ammonites and sea urchins from this sea has been found in the chalk quarries of Ranmore.

Between 110 and 120 million years ago huge migrating underwater sand dunes covered this area. They were buried and cemented to form the greensand of the hills to the south of the town.

Over 120 million years ago northern Europe was covered by a great lake. Sediment from the rivers flowing into the lake from the swampy plain that covered southern England eventually formed the thick Wealden clay that is found to the south of Dorking. The remains of the dinosaurs which roamed the Dorking area [then] have been found in the clays of Capel and Ockley. 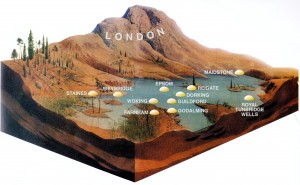 An Iguanadon was about 9 metres long with webbed hoof-like fingertips, a thumb-claw and a wide beak.

A fossilised Iguanadon tail was found during the digging of a well shaft in the clay at Broomells Farm, Capel in 1891. Another has been found at Redlands, South Holmwood. Image: Heinrich Harder 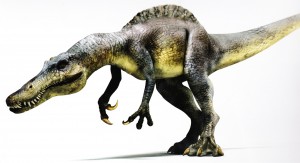 In 1983 amateur fossil hunter William Walker discovered a huge bone at the Smokejack clay pits at Walliswood near Ockley. The previously unknown species was named after its discoverer and the fossilized skeleton is now on display at the Natural History Museum. Baryonx (‘heavy claw’) Walkeri was a rare fish-eating dinosaur; fish scales were found in its stomach. Image Nobu Tamura

Dorking Museum acknowledges the assistance of The Curry Fund of the Geologists’ Association http://geologists’ association.org.uk