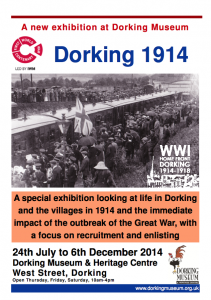 Dorking, like other towns, villages and cities all over the world commemorated the Centenary of the First World War.

Dorking Museum’s 1914 exhibition focused on what went on in this area when War broke out.  It covered the town and surrounding villages and their experience of the early months of the war. There was a particular focus on recruitment and enlisting – and asking the question, ‘was enlistment really voluntary?’

We had panels on the issues that affected the people of Dorking in the first few months of the war. From the anti-German feeling around Dorking, that caused the owner of Degenhardts store on South Street to have to write to the Dorking Advertiser explaining although he had a Germanic name – he was English by birth and not to boycott his shop to news that the local football team could only continue to play of they gave all their receipts to the Prince of Wales relief fund.

The exhibition featured display panels in the Museum’s temporary exhibition space, and also spilled in to all areas of the permanent exhibition, showing how the war affected all aspects of town life.

Outside the museum, there were recruitment posters and biographies of some of the town’s major recruiters and those who enlisted.

Local artefacts from the period displayed, included personal items from John Lee- Steere of Jayes Park, Ockley who was killed in November 1914, just a couple of hours after he had finished a letter home. The letters were displayed alongside photographs of John. The full transcripts of the letters and an account of John Lee-Steere’s time in France can be read here

These smaller pieces of information are placed all over the Museum.

We have a dedicated First World War loan box for use in schools. Please have a look here for more details.