In March 1944 much of Europe, from the Arctic Circle to the Mediterranean, was occupied by Nazi Germany and her allies. Plans to invade Britain had been shelved after the Battle of Britain in 1940, and the intensive ‘Blitz’ that followed had failed to bomb Britain into agreeing terms. But German bombers, taking off from France and western Germany, continued to inflict damage.

In Britain the night-time bombing raids on London and the south of England that took place between January and May 1944 were known as the ‘Little’ or ‘Baby’ Blitz. In Germany they were code-named Operation Steinbock. The raids were launched primarily for propaganda purposes, and in retaliation for Allied raids on Germany, rather than for military objectives.

The Steinbock raids left over 1,500 dead and nearly 3000 injured. But militarily the operation achieved little and heavy losses in the bomber fleet left the Luftwaffe struggling to counterattack when the Allies landed in Normandy a few months later.

The Steinbock offensive was the last large-scale bombing operation against Britain. Thereafter V1 and V2 missiles were used instead of manned bombers. 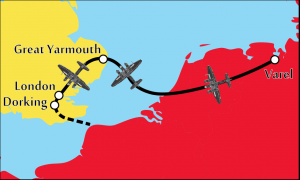 The route taken by the Junkers from Varel in Germany, across to East Anglia, down to bomb London and its route home across Mole Valley towards Beachy Head.

Junkers Ju 88 A-4 no. 140099, took off with about 25 other aircraft from Varel in northern Germany. Its flight path took it over the Netherlands and the Dutch coast, with a turning point marked by white buoys in the North Sea. It crossed the English coast at Great Yarmouth and turned south towards the target: the area to the west of the Isle of Dogs. Westminster, Hyde Park, Knightsbridge, Rochester Row, Monck Street, Cliveden Place and two churches in Medway Street and Flask Lane were all hit during the raid.