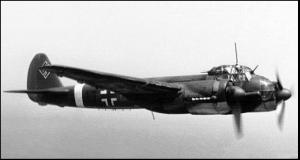 The Junkers Ju 88 was designed in the mid-1930s as a fast bomber (‘schnellbomber’). Scheduled for service in 1938, developmental problems meant that the aircraft did not become available until the day of the attack on Poland in  September 1939. It became one of the Luftwaffe’s most versatile combat aircraft. More than 16,000 were built in different versions: dive bombers, fighter bombers, attack bombers, heavy fighters and night fighters. 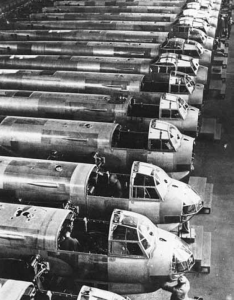 The aircraft which crashed at Blackbrook was a Junkers Ju 88 version A-4 which had a longer wingspan and more powerful engines than earlier models. The A-4 was brought into service in the closing days of the Battle of Britain in the autumn of 1940. It was a highly effective military aircraft.

Junkers production line in 1941. 16,000 of the aircraft were produced. So versatile were they that they were nick-named ‘The Maid of All Work’.

Over fourteen metres long and with a wingspan of twenty metres, the Junkers Ju 88 A-4 had a maximum take-off weight (when loaded with fuel and bombs) of 14,000 kilograms and a top speed of over 500 kilometres per hour. When fully fuelled it had a range of nearly two and a half thousand kilometres. As with the plane that came down at Blackbrook, the Junkers Ju 88 A-4 usually flew with a crew of four, including the pilot and a bombardier who operated the machine gun that was mounted on the front windscreen and which fired forwards. The two machine guns mounted in the back of the cockpit which fired to the rear, and the twin machine gun in the ventral rear position, were operated by the radio operator and the navigator.