As early as the 1890s there was concern at the wear and tear on roads caused by mass cycling. Dorking Urban District Council considered making cyclists contribute to road upkeep. But cyclists were appreciative road users: in 1896 Dorking Cycling Club entertained 30 of the council’s roadmen to supper, giving each a present of tobacco and a pipe in gratitude for the use of the steamroller and the removal of loose stones from roads.

Battles for use of the roads began with the appearance of early cars. In 1893 Dorking Cycling Club sought Lord Ashcombe’s support for a Universal Lights Bill requiring vehicles to carry lights after dark.

The advent of cycle road racing in the 1890s added another element to the conflict. As road racing was of questionable legality the National Cyclists’ Union insisted that clubs race only at velodromes. But rebel racers organized road time-trials.

In the 1920s the Old Paulonians’ Cycling Club introduced summer time trials over 25, 30 and 50 miles to their schedules. Competitors set off at 5am on Sunday mornings from the bandstand in South Street at 1 minute intervals. The early start enabled competitors, (wearing black to evade detection), to avoid not just congestion but also the local police. 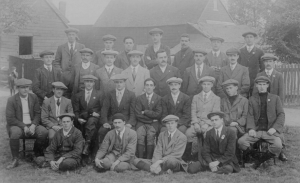 The Old Paulonians’ Cycling Club at the Duke’s Head, Beare Green in about 1913. The OPCC introduced stop-watch competitions and timed hill climbs up Box Hill. The club was at the peak of its popularity in the late 1920s and early 1930s. 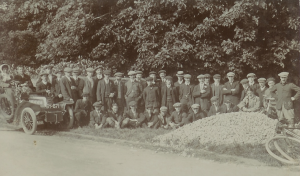 The Old Paulonians’ Cycling Club with an early car. It was cyclists who first lobbied for improvements to roads from the 1870s, 30 years before motoring organisations arrived on the scene. The motor industry grew from the popularity of wheeled transport by bicycle, but after 1896, when the law requiring low speeds of motorists (who had to be preceded by a man waving a red flag) was repealed, car speeds increased and motorists demanded better surfaces. 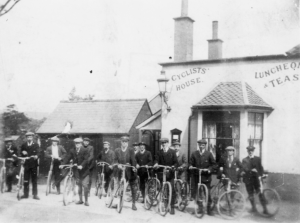 Westcott Cycling Club outside the Prince of Wales, which advertises itself as a ‘cyclists’ house’ in 1908.

Road cycle racing was finally accepted by cycling’s new governing body, the British Cycling Federation, in 1959. In 2012 the Olympic cycle route brought cyclists to Dorking to complete a 15.5km (9.6 mile) circuit up the Zig Zag hill to the top of Box Hill. Its 5% gradient now features in regular road races. Due to world coverage the Zig Zag is now rated the most popular cycle route in the world. Television coverage has inspired thousands of people to take up cycling, and Box Hill is visited by hundreds of riders every weekend. It is a situation with which local drivers are not always happy! 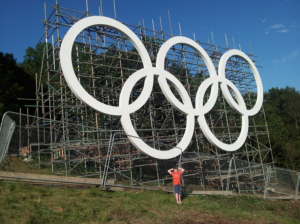 The Olympic rings on the top of Box Hill in July 2012. Box Hill, with its circuit up the Zig Zag, was seen by millions around the world, and has since become a mecca for cyclists. The climb up Leith Hill is considered far more difficult.

The Olympic men’s road race on Box Hill in 2012. Bradley Wiggins was amongst those completing the Box Hill circuit. (Photograph by permission of Tom Loftus) 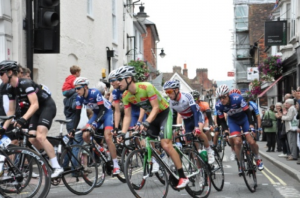 Road racers in the Tour of Britain at Pump Corner, Dorking, in 2013.

(Photograph by permission of Tom Loftus)

Previous Page : From Secret Races to the Olympics