Dorking was not a military or industrial target during the Second World War but it suffered damage and casualties. During the Battle of Britain, in the summer and autumn of 1940, planes fought in the skies above and several came down in the surrounding countryside. In the Blitz that followed German bombers often dumped unused bombs on the town and hills to lighten their loads on the return journey. And in the later days of the war flying bombs aimed at London caused indiscriminate damage.

All the local parishes were hit by bombs, rockets or incendiaries.

The map pinpoints some of the most serious incidents. 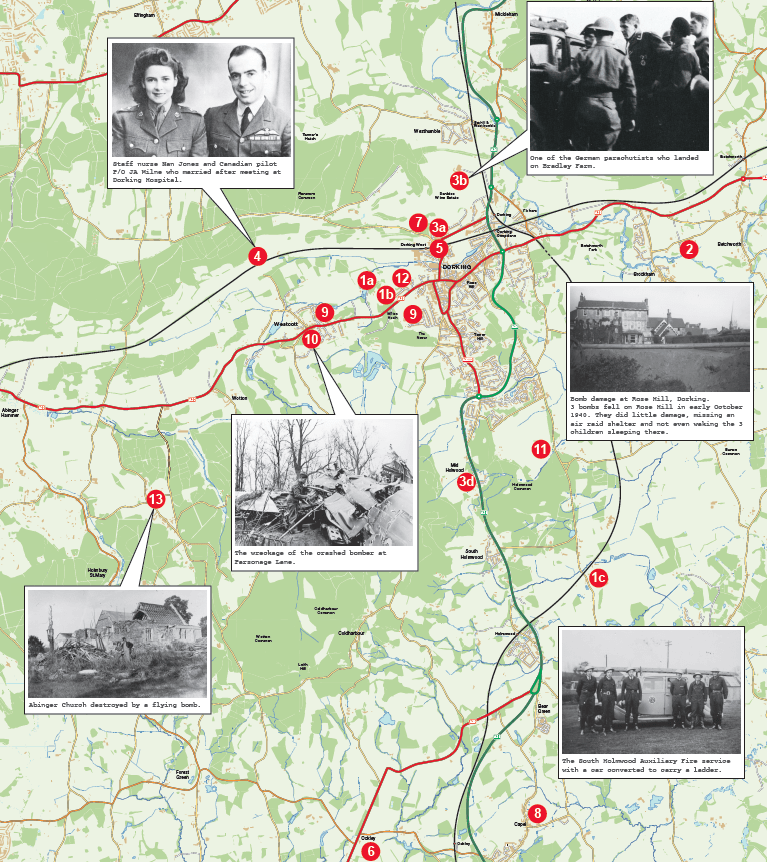 The Heinkel drops its bombs whilst trying to outrun attacking Allied planes. A motorcyclist is severely injured and dies the next day. An elderly man dies whilst hurrying home to the Cotmandene Almshouses. Pigs are burned alive in their pen by a falling incendiary. Westcott Road; Sondes Place and Milton Court are damaged. The Heinkel then collides with an attacking Hurricane and crashes near Swires Farm, Henfold Lane, Holmwood. 3 of the crew are killed; the pilot lands by parachute near Dorking. The Hurricane comes down nearby. 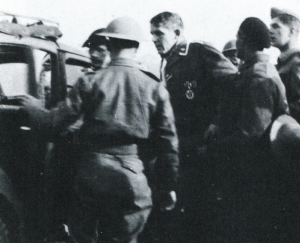 People race to the scene when the pilot of the Junkers falls – badly burned and unconscious – by parachute in Yew Tree Road, Dorking.  Other crew members land at Bradley Farm near Box Hill, Scammels Farm, Blackbrook, and the Norfolk Arms, Mid Holmwood. All are captured. A fifth crew member is killed when he falls from his parachute. The plane comes down at Folly Farm, Holmwood (causing a local woman to miscarry), the gun turret at Pilgrim’s Close, Westhumble, and the tail at Croft Avenue, Dorking.

4). October 1940 Allied plane down in Westcott: a happy ending

A Hurricane is shot down and lands on a railway bank near Westcott. The Canadian pilot P/O Milne is taken to hospital in Dorking where he meets nurse Nan Jones who he goes on to marry.

2 houses destroyed in Fraser Gardens, Dorking, killing 2 sisters aged 12 and 20 when their home collapses. Their parents and 2 brothers survive, one brother being blown out of bed. A next door neighbour is also killed.

A night bomber is brought down in flames. 3 crew members die in the plane, another is found dead in his parachute and the 5th is captured.

A boy on a day trip from Brixton is killed and 2 others injured when they go looking for ‘souvenirs’ in the Dorking chalk pits where the Home Guard have been training. Elsie King, who lived near by volunteers towels and linen for first aid, and is issued with extra coupons to replace them.

The pilot of the Focke-Wolfe, realising that it is about to explode, warns approaching villagers to crouch. He gives himself up to 2 local brothers who had served in France in the First World War and are able to converse with him in French.

4 houses at Watson Road Westcott are destroyed, killing a woman of 92, 2 babies and 2 evacuee boys who were thrown from their bed, which landed on top of them. 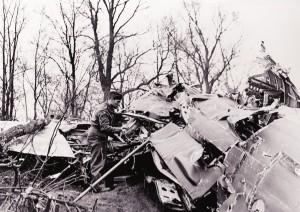 The Dornier is shot down and crashes in Parsonage Lane. 2 of the crew land by parachute at Wotton. Georg Trunsberger and Julius Schurgers are arrested by a special constable and taken to the Wotton Hatch Hotel.

The Junkers Ju crashes on Holmwood Common near Blackbrook.

Elm Cottage in Sandy Lane is destroyed by a flying bomb, killing 2 women and a boy. A few days later 74 year-old Elizabeth Cheeseman dies of shock when a flying bomb lands in Ockley. 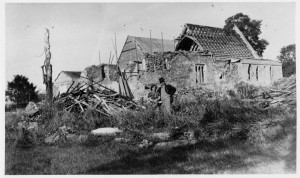 Abinger Church is destroyed by a flying bomb just before the morning service is about to begin.  The nearby Abinger Hatch inn, and Max Beerbohm’s Manor House Cottage, are damaged.

Miss Honorine Williamson in Dorking Air Raid Patrol uniform. Miss Williamson was brought up in Dorking, the niece of Vaughan Williams, and was killed when her home in London was bombed. 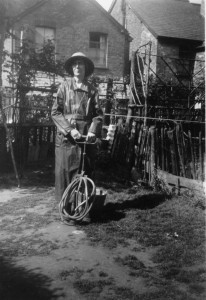 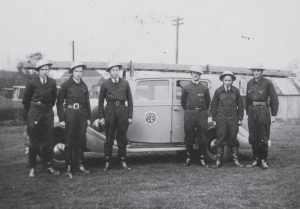 The South Holmwood Auxiliary Fire service with a car converted to carry a ladder. 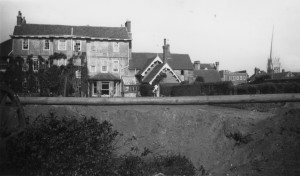 Bomb damage at Rose Hill, Dorking. 3 bombs fell on Rose Hill in early October 1940. They did little damage, missing an air raid shelter and did not even wake the three children sleeping there.

The map reproduced below shows all the bombs, incendiaries, planes downed and parachute landings in the Dorking Urban District Council area between 1939 and 1945. 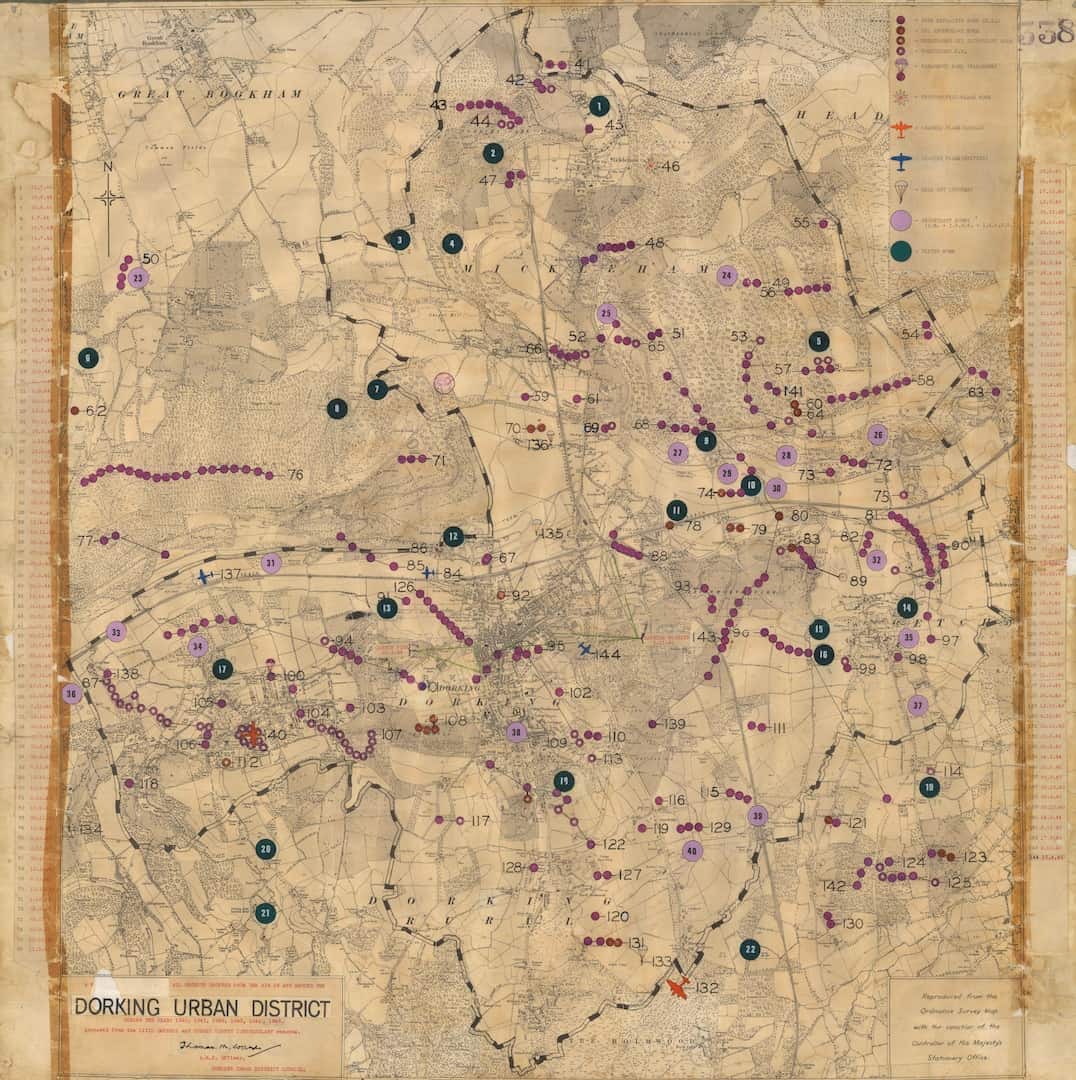