Stanley Baj from Mississauga, Ontario, Canada found this interesting suffragette postcard in his local flea market, and mailed it over to the Museum. 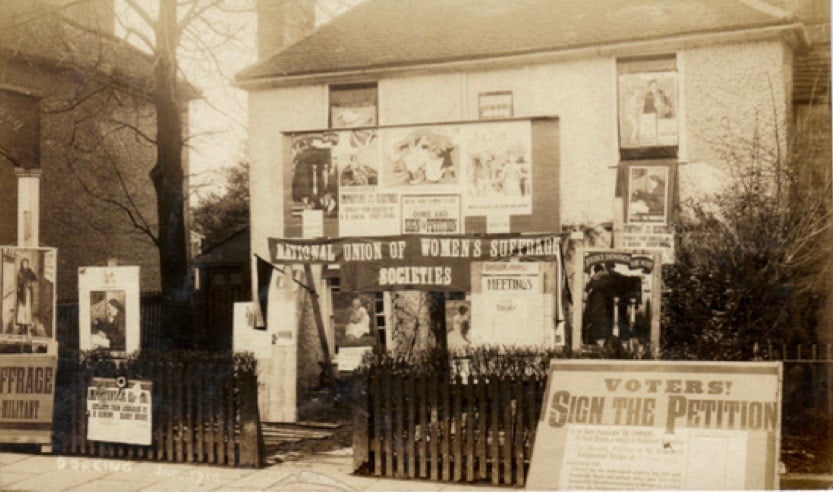 In the bottom left hand corner barely visible states “Dorking Jan. 1910”, the postcard shows the National Union of Women’s Suffragette Societies requesting voters sign a petition for women to get the vote. The “VOTERS SIGN THE PETITION” poster states, “To the Right Honourable,  THE COMMONS of Great Britain & Ireland in Parliament Assembled, The Humble Petition of Undersigned, Parliamentary Electors of  (left blank) SHEWETH , THAT we the undersigned urgently beg that your Honourable House will without delay pass into law a measure for the enfranchisement of women by granting them the Parliamentary vote”  On the fence one of the posters states  “Important to all electors, Extracts from addresses by  R .H. Rawson and Harry Brodie.” 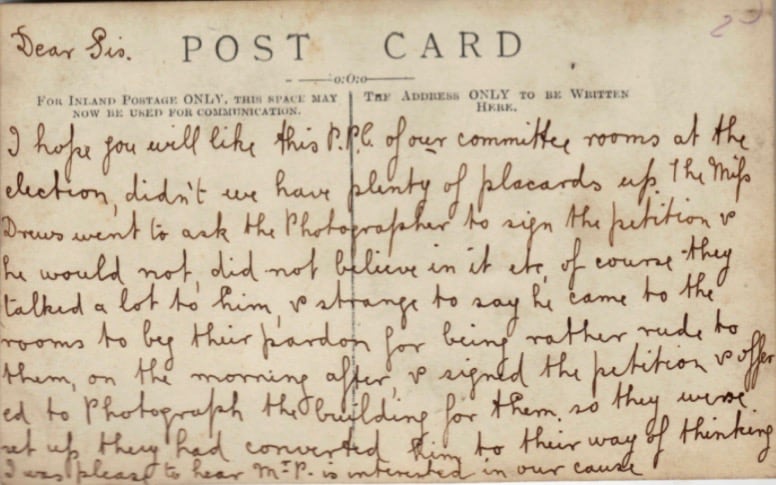 The back of the postcard reads

I hope you will like this P.P.C of our committee room at the election, didn’t we have plenty of placards up. The Misses Drews went to ask the photographer to sign the petition, and he would not, did not believe in it etc. Of course they they talked a lot to him, and strange to say he came to the rooms to beg their pardon for being rather rude to them on the morning after, and signed the petition and offered to photograph the building for them, so they were set up they had converted him to their way of thinking.

I was pleased to hear Mrs. P is interested in our work.

Exhibitions manager Kathy Atherton was able to piece together a bit more of the story.

“I have been researching the fight for the vote for women in the Surrey Hills for many years and have come across the Leith Hill Women’s Suffrage Society in letters to the paper etc and am familiar with some of their prominent members. This card would appear to relate to the general election campaign of Jan 1910 (there was a 2nd election in December) when Harry Brodie fought Richard Rawson for the parliamentary seat.

The writing on the back is a real snippet of life. The Miss Drews referred to were three local sisters who lived in Westcott and worked as artists. They were ardent suffrage campaigners and well known for writing plays supporting the women’s vote and performing them at public meetings.”